My best friend Tyler and I drove from Delaware to California on our Road Trippity Dippity, and if you’ve caught the rest of our trip, you know that we couldn’t miss the opportunity to stop and catch some weird roadside attractions along the way.

The home of the free the land of the kooky. Driving through middle America on my road trip out west was like entering the unknown. What do people do in the middle of nowhere Texas? I’ve discovered they make really large, obscure, and kind of sad monuments that hardly anyone will ever see.

How do you find the best roadside attractions?

There are a few really great sites to help you find all of the odd and obscure attractions right along your route. If you’re a smart, forward thinker with all of your trip together, I recommend the site Roadtrippers. Here’s our route below with some of the stops we made, plus a few Delaware attractions thrown in.

Roadtrippers doesn’t have some of the really obscure smaller stops, for those we used Atlas Obscura or Roadside America. If you just look up the state you’re in it’ll show you all the good stuff.

The biggest, tallest, shortest, smallest, heaviest, lightest, ugliest, you name it, the possibilities are endless.

Roadside attractions fill in those particularly boring bits of road. They keep you going, they represent the ingenuity and creative spirit of their creators, they’re the heart of America!!

South of the Border 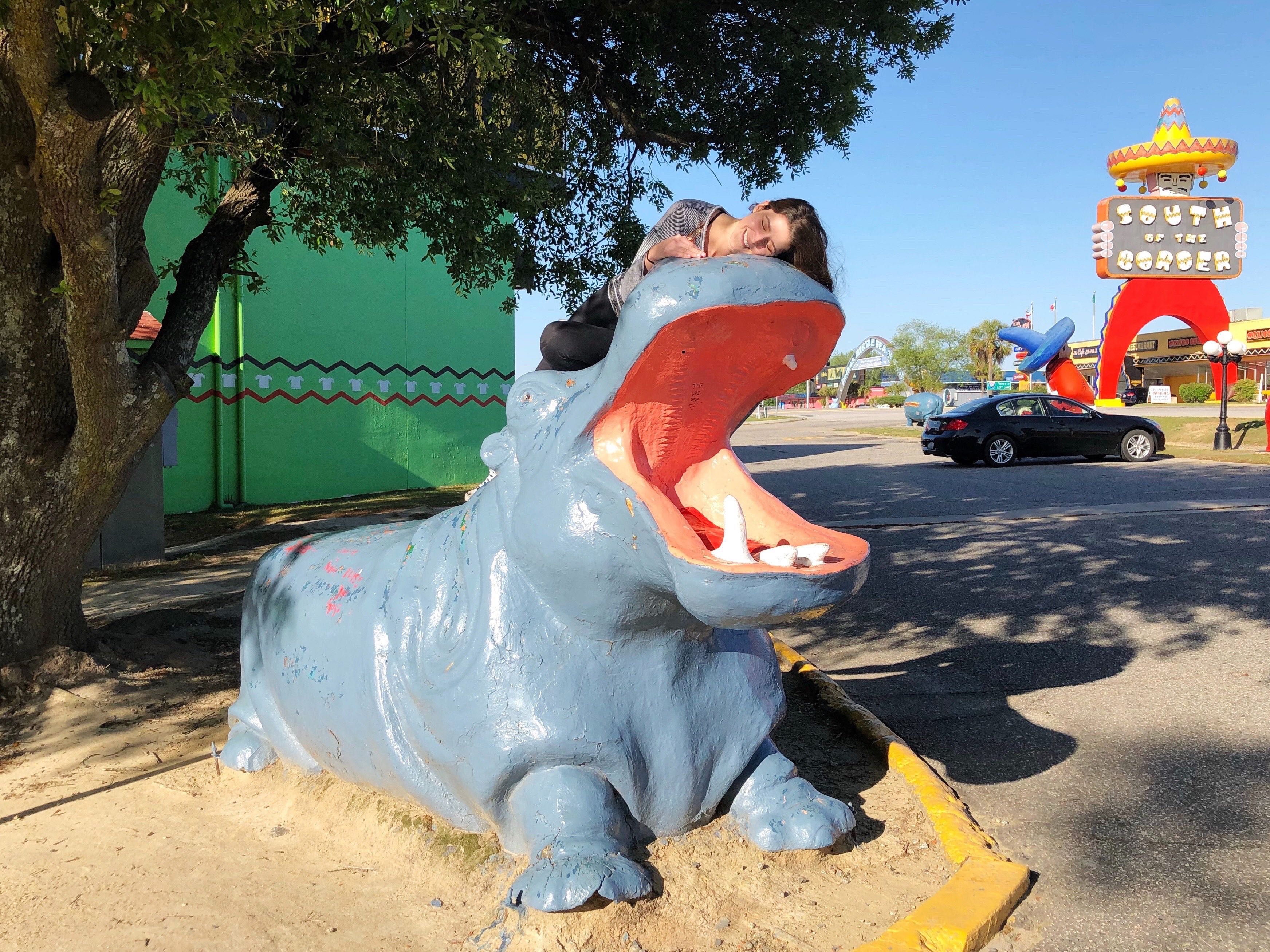 Driving down I95 along the east coast of the country you’ll start seeing signs asking, “What’s South of the Border?” Your interest will be peaked, it will give you something to look forward to as you continue on long straight stretches of highway, entertained only by passing large clumps of trees, gas station stops, or even better, a bridge!

The “miles to” numbers start to get smaller and smaller and the billboards more frequent, but you’ll miss the exit anyway.

Turn around and enter “South of the Border,” to find a large Mexican stereotype caricature greeting you along with random animals, dinosaurs, and other miscellaneous characters spread out and available to climb on. 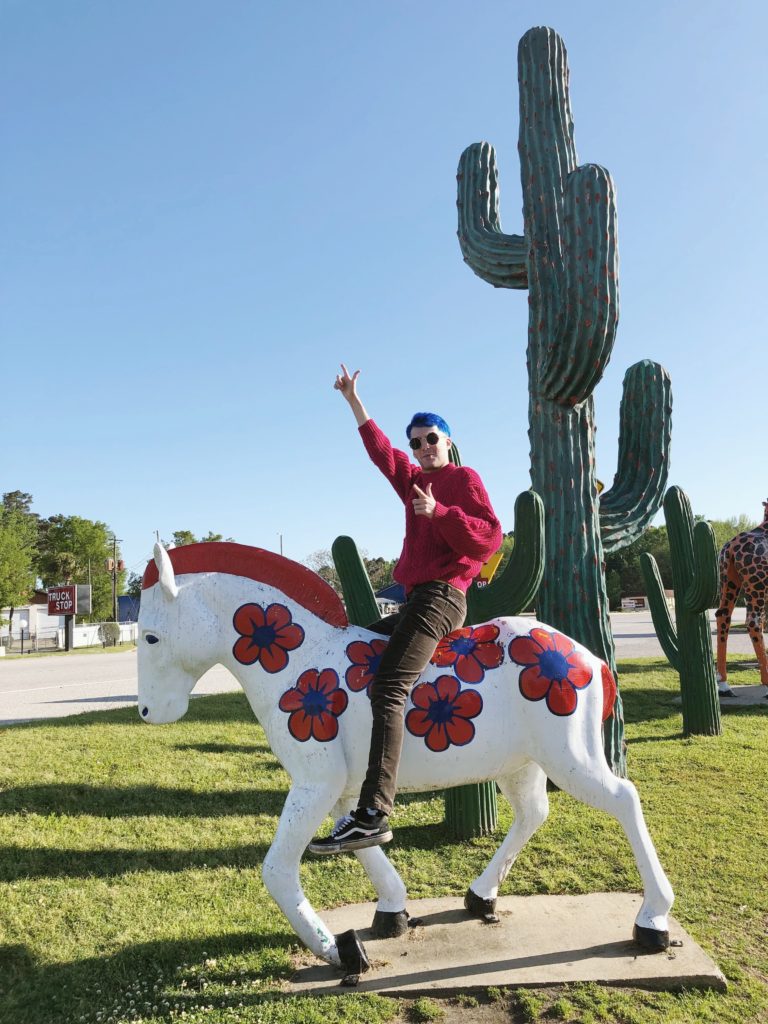 At this point we were still wondering what South of the Border was exactly. It seems to be a run-down rest-stop on roids. Free bathrooms, a place to stretch your legs, a reptile exhibit, a few rides, fireworks warehouse, restaurant, and the biggest, tackiest souvenir shop I’ve ever seen.

Our interest was primarily with the animals.

Like all great roadside attractions, South of the Border is random, and they do a fantastic job at building the suspense throughout the trip with those billboards, I’ll give them that.

It’s curious how the place has lasted this long.

Where I see the Mexican theme aspect of South of the Border as blatant racism, the online debates I’ve been rummaging through for the last half-hour seem to defend it. People insist it’s, “dated, not racist,” so let’s take a little look at the history behind the place.

South of the Border was started by Alan Schafer, a Jewish man, in 1949 as a beer depot and grew from there, according to the South of the Border website. When Schafer went to Mexico for business he met two men, Pedro and Pancho, whom he helped enter and work in the U.S. They worked as bellboys at the motel and people eventually began calling them both Pedro, thus inspiring the giant “Pedro” we see today (you can see him in the corner of the hippo photo).

One article even got a Salvadorian man to say he wasn’t offended, so that’s a good ‘ol American “go-ahead” if I’ve ever seen one. What a great introduction to the South!

Located on University of Texas’ campus in Odessa, and nearly historically accurate for all of your Stonehenge studying needs. 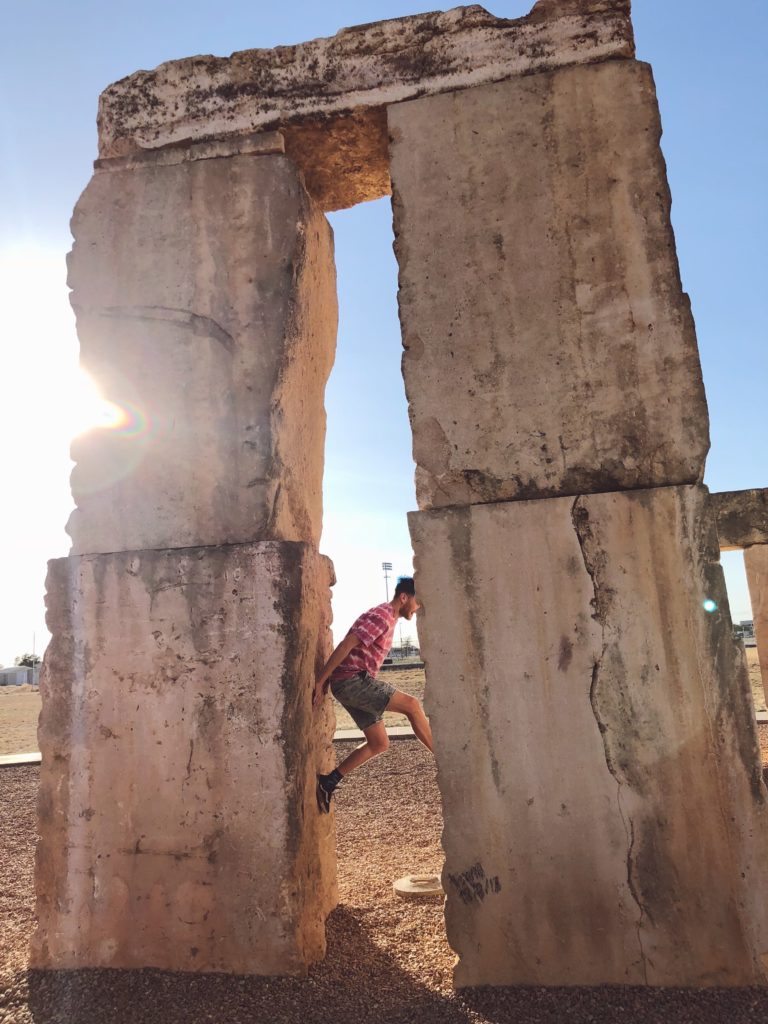 Stonehenge replicas are all the rage as American roadside attractions. There are many throughout the country, but this one was in the same town as the jackrabbit I had developed an obsessive longing to see.

It’s difficult to find a lot of information on the history of the site, but the Library of Congress boasts it only took six weeks to construct, when the original, “may have taken over 2,000 years to complete!”

And then there’s texasbob.com, that provided the locals’ take on the attraction.

Per Texas Bob, coming at you from across the street at the local Home Depot, Odessans on the Street:

There you have it. And Tyler and I were just the kind of people that would drive out of the way to this town to see this thing, and we sure did go have lunch, we got Chipotle AND Dairy Queen. Look at us, contributing to the economy. You’re welcome.

Bob also informs that it’s 14% shorter than the original Stonehenge, so 86% of the real thing with 0% of the crowds.

Cancel your other vacation plans, Odessa is the place to be this year!

The Largest Jackrabbit in the World

I was drawn to this rabbit from the moment I heard about it. It’s a statue, and it’s the former largest jackrabbit in the world, but don’t think any less of it. 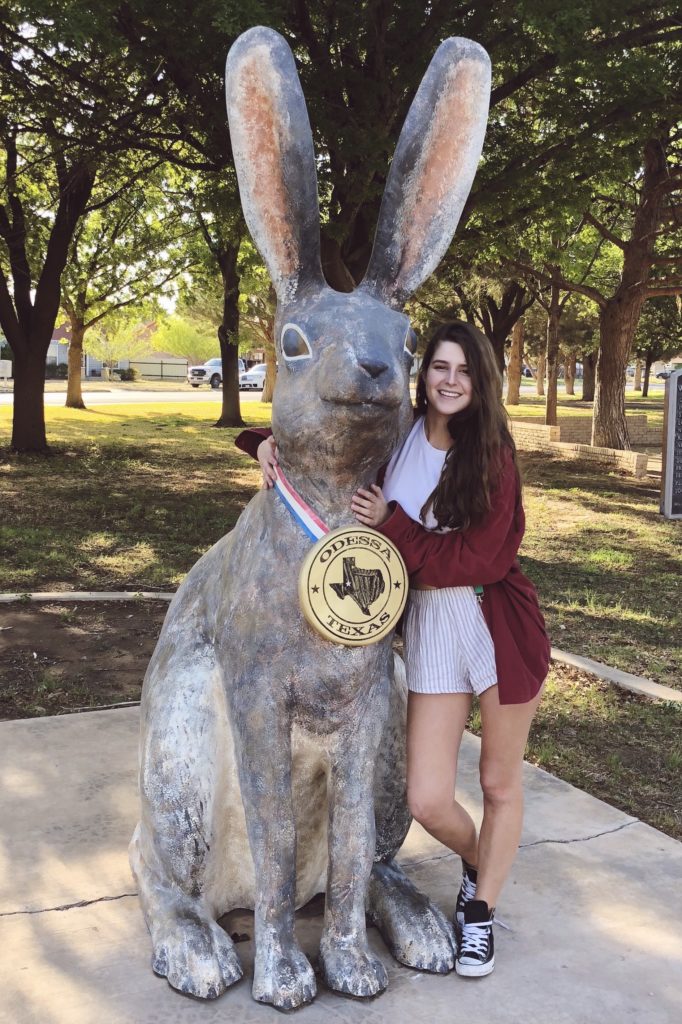 Jack Ben Rabbit was created in 1962 in tribute to the annual jackrabbit roping competition held in Odessa before the Humane Society shut the event down in 1978 (thank you Humane Society), according to Roadside America.

Then he was stuffed away in a storage yard until the people rallied for his return and he was brought back into the limelight to sit at the Ector County Independent School District Administration Building, where I’m happy to report, he comfortably resides to this day.

Unbeknownst to him, last year in Ralls, Texas, a man commissioned to have a newer, bigger jackrabbit created that took the title away from Jack Ben.

KCBD reports it had “long been the dream” of local Bruce Harris to have the world’s largest hare in his town since he saw Jack Ben in Odessa 15 years ago.

“From that day, I was just sick about it. We’re the home of the Jackrabbits and we need to have the World’s Largest Jackrabbit,” Harris told KCBD.

There is no match to the charm of Jack Ben Rabbit, the largest jackrabbit in the world… formerly.

I’m eager to see Odessa build an even bigger jackrabbit in response. 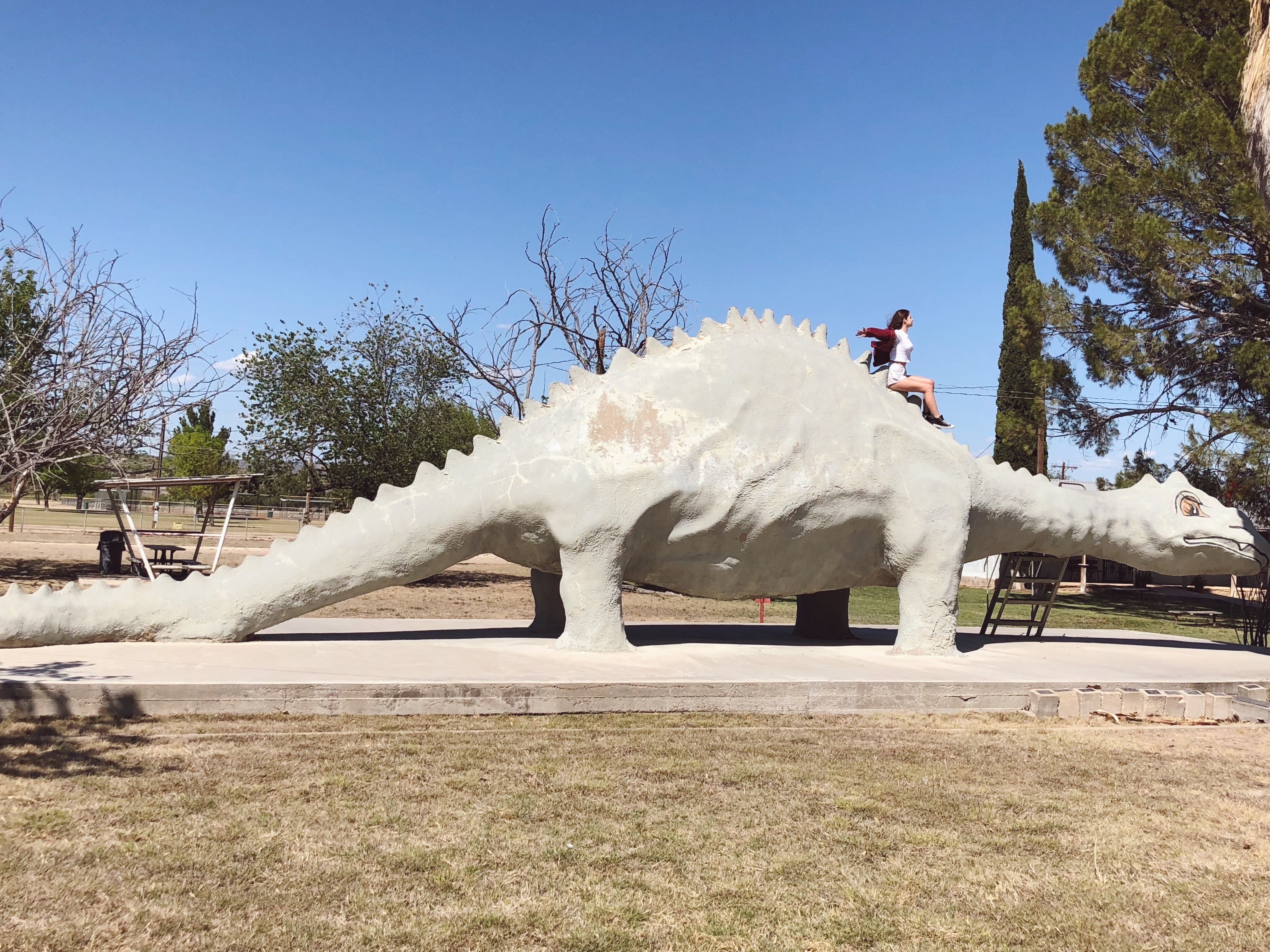 With a name like that you best believe I’m going.

A tribute to Iraan (pronounced Ira-Ann) local VT Hamlin and his “Alley Oop” comics from the 1930s, Alley Oop Fantasy Land is a fenced in area home to a museum, a large metal caveman, a wind turbine blade, and the real show stopper, a massive dinosaur named Dinny. With respectable bathrooms to boot!

Seemingly made to scale, an extremely uncomfortable sit on 65-foot-long Dinny will make you feel like you’re right in the comic strip, and more importantly, you can get that Instagram photo you’ve been sitting in the car for the last 11 hours just starving for.

The museum on the property wasn’t open at the time, but it highlights the town’s history with oil and features prehistoric fossils and Native American artifacts.

And if you’ve ever wondered how big a wind turbine blade is, look no further than Iraan. 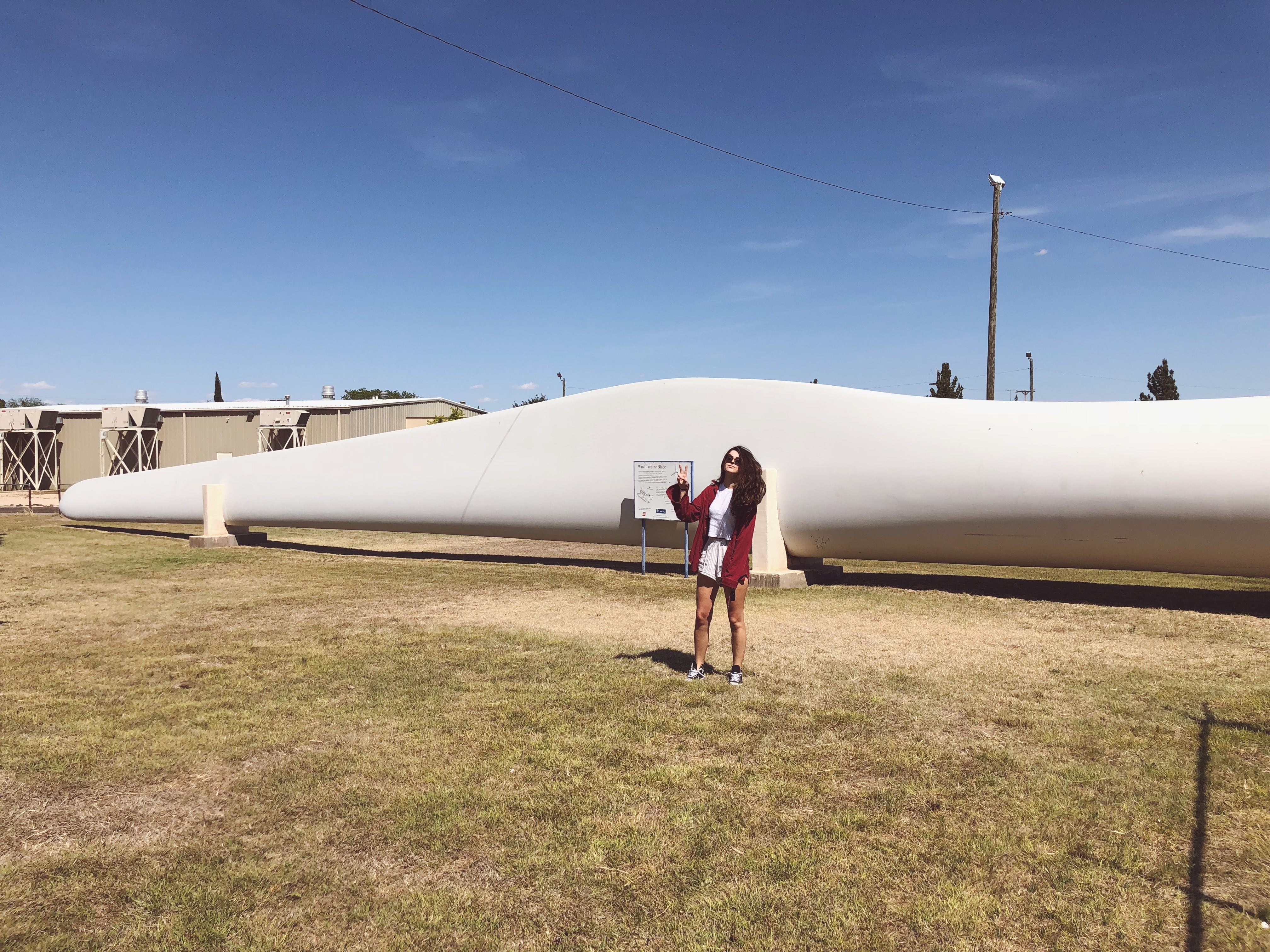 What a world, what a country

I visited many more odd, all-American stops like these on the rest of my journey, but they were full stops so don’t count as roadside attractions! Like, the entire town of Roswell, N.M., was a bizarre alien-filled attraction, and the case can be made for the largest VHS video store in the world over in Austin, and Salvation Mountain in Southern California cannot be overlooked. Make sure to check out what we got into on the rest of our trip! 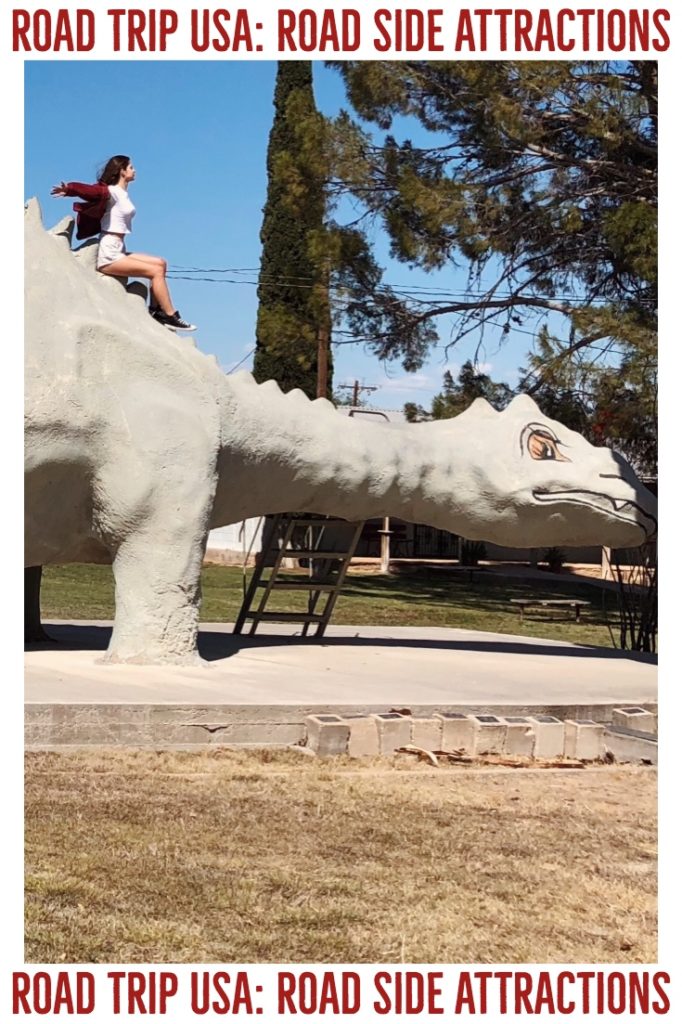