It works like a “Dora the Explorer” episode, a three step adventure: “Prison,” “Needle,” “Table!”

Go around the rocky Prison, thread the tall rock pinnacle Needle and walk on top of the grassy plateau Table to find self fulfillment, become one with nature, release those endorphins and grab a couple photos. At the very least, feel like you did something productive with your day.

Or in my case, optimistically pass the Prison, nearly thread the Needle, get turned around and never find the Table, give up and head back the way you came and have an odd spiritual encounter with a lone sheep.

You would think, growing up with Dora, that her lessons would stick with me. I have the backpack, but nothing useful in it. No map, no idiot blue monkey following me around to make me look good.

It was about 4:30 p.m. when I started the circuit, not ideal apparently, judging by the hoards of people making their way back to their cars.

With only two and a half days to spend in Skye I packed as much as physically possible into each day. I woke up early and hiked Coire Lagan, then grabbed a bite to eat in Portree and made my way here to the Quirrang, with the intention to make it to Neist Point by sunset.

With the exception of one weird climb-down climb-up deal to get over a little gorge, the walk to the Prison is easy. Very well established path, but as with all of the walks I did in Scotland, rocks warranting ankle protecting boots.

You’ll see the Prison on your right, and to your left, the tall rock pinnacles of the Quiraing, with the big ‘Needle’ at the forefront. So you’re supposed to “thread the needle” by walking between it and the rock next to it.

I couldn’t understand where to start so I climbed to the left of the Needle and was satisfied.

Whether you thread it or not, to get up there you need to leave the path that continues around the Quiraing and climb this steep incline spotted with scree, smaller loose rocks. It’s a little tiring but doable by anyone of average fitness.

Climbing that small amount of scree really put into perspective what an effort going up the Great Stone Chute of the Black Cuilin is. I could see the climbers inching their way up the massive bank of the stuff when I walked Coire Lagan.

Irony didn’t win this one and I got trapped at the Needle rather than the Prison.

Ok you know what, I was running around, I got turned around, I’m used to at least one or two other people being on the trail with me, I wasn’t paying attention, I couldn’t figure it out, ok?!

I’ve since looked to the Internet to find out if that part of the walk is heavily explained, maybe something like, “Make sure you stay straight after the initial scree climb,” or anything… but no. No one else seems to have had such an issue.

Instead of exploring any further in the bitter cold and under the setting sun I went down the way I came up and followed the trail around the pinnacles.

If I had continued up there I would have found and climbed up to the Table, a plateau behind the pinnacles with the best views of the Quiraing.

Along the walk down below you’ll soon reach a little gate and the path becomes significantly more narrow. I followed it for a while, but with daylight dwindling and without knowing how much further I had to go, in the hope of still making it to Neist Point I turned back.

The last half of the loop is pretty boggy I hear, so be prepared for that or turn around when I did.

I was in high spirits on the way back, walking the thin trail hugging the hillside with a newfound pep in my step.

Until I turned the corner and bam, two eyes barely visible surrounded by black fur staring at me.

Look at him. Menacing.

“I don’t like the way you’re looking at me,” I told him as I stopped.

He remained dead still, chewing a couple times and never unfixing his eyes as I tried to get a read on him.

We don’t have many horned sheep roaming around on very thin trails on the sides of hills and mountains back home in Delaware.

Sometimes chickens fall out of the 16-wheelers on the highway on their way to slaughter, but that’s entirely different. This is a real-life Scottish sheep raised in the wild. A sheep with its wits about it!

Now, Delaware isn’t all flat land and chicken slaughter, it can get pretty exciting. We’re the home of the Toddler Fight Club scandal of 2012.

What a fantastic news day…

Fully allowing my imagination take over I dubbed this all too stoic sheep a threat.

On the side of this cliff, probably dehydrated, exhausted, out of provisions, just coming down from being lost on a well-traveled trail, morale put to its finest test, my freak flag was dancing like no one was watching. Because they weren’t!

But before I am odd, I am a millennial. I can never have too many pictures of sheep so I took advantage of his stillness to grab a few shots. 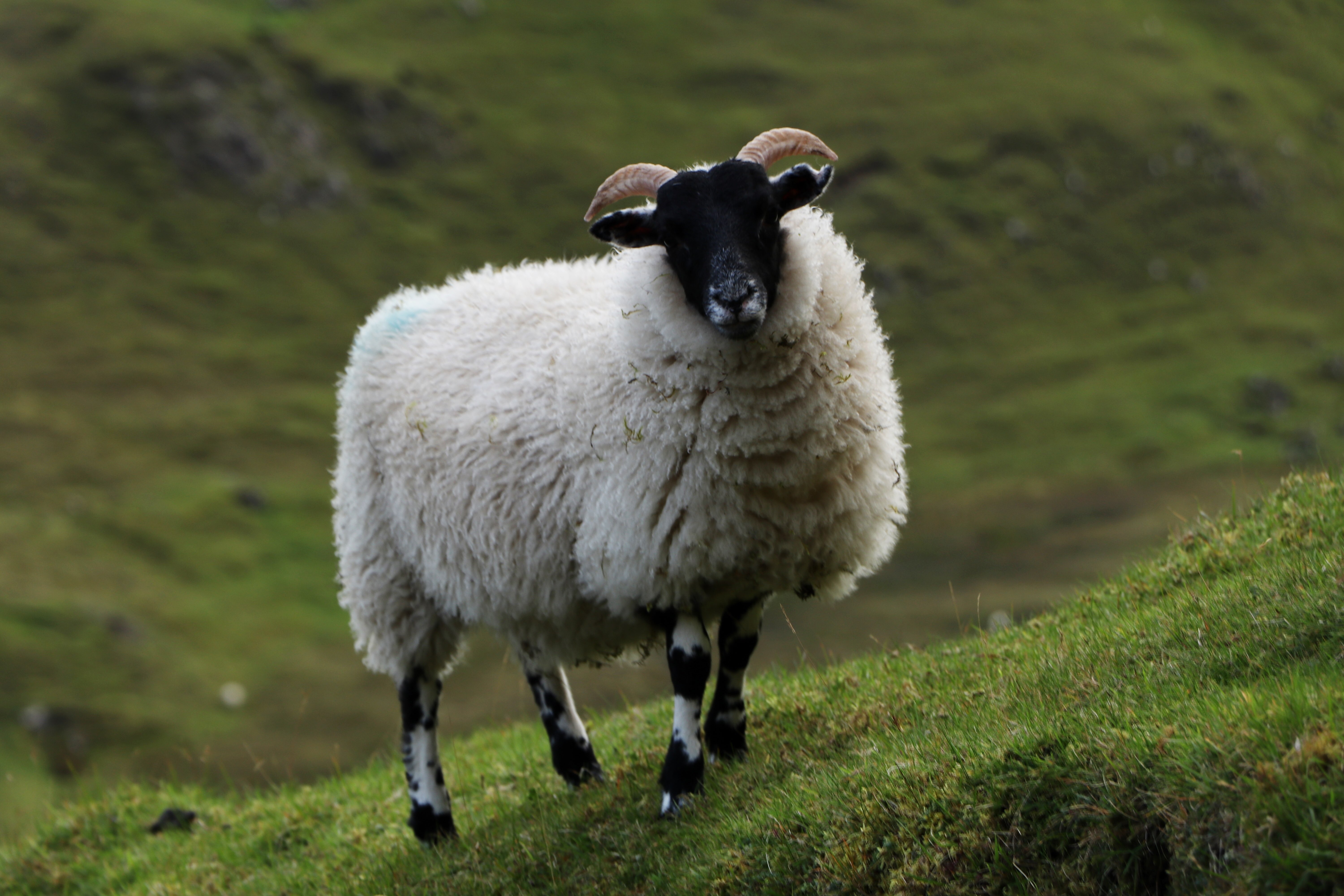 “Are you stupid or plotting something?” I wondered as I glared at him.

Hard to tell with those silent types.

At first I just talked about him to Snapchat, my companion, my version of Dora’s largely unhelpful blue monkey, explaining my fear of him.

I tired of talking about him and put down the phone to get to the point.

“Are you going to head-butt me if I walk past you?”

I start inching my way forward, stopping at where I decided was the red line between me and his personal space.

Ten minutes after this pathetic glaring match and trying to assert my dominance, he unfixed his eyes, bent his head and began eating grass, what I can only assume he was doing before I turned the corner and this charade started.

Feeling that the motion was his way of saying, “Walk,” I went on, and with a newfound appreciation for horned sheep. Although I’m still unsure if they’re dull or enlightened.

He may very well be wondering the same thing about me.

Moral of the story, stay hydrated. 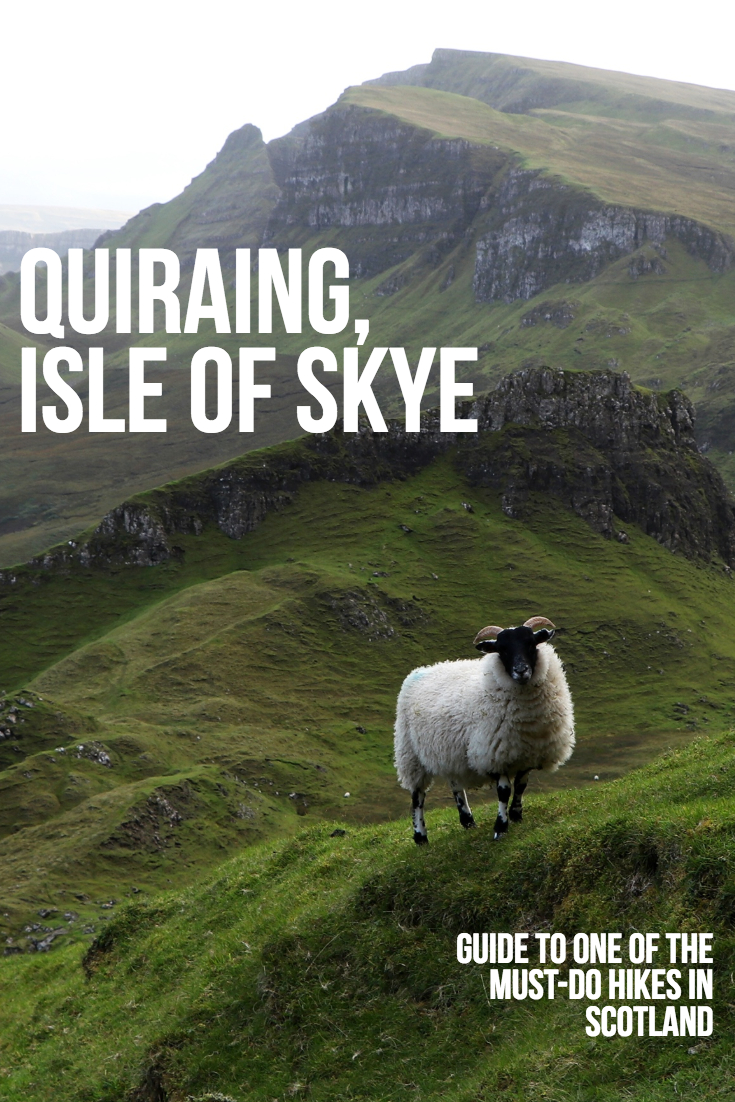