At the very least, know Botero is synonymous with volume.

Established after Colombian artist Fernando Botero donated over 200 pieces from his personal collection (85 of those works were from other renowned artists: Dali, Monet, Picasso, Giacometti and many more), the museum opened in 2000 with only one condition, entry would be free for visitors.

Touring the large and wordy Museo de Oro (The Gold Museum) left my mom and I exhausted, but knowing the Botero Museum was supposed to be a highlight of Bogotá we dragged ourselves there after a sweet bite at La Puerta Falsa.

One step into the first room and I was wide awake again (finding out it was free shocked us and definitely helped liven us up a bit too).

We loved our visit to the museum, Botero’s art is a ton of fun to take in, and we were surprised at the amount and caliber of the other works featured.

Aside from the art, it was nice to see the inside of an old, grand colonial mansion, as that’s what the building started out as many years ago.

Botero is famous for the large volume and exaggeration of figures, a style called “Boterismo.” As my mom points out, he uses small details like little moles and small eyes to make the already inflated  forms even more immense.

Inspired by the volume in Florentine art, especially influenced by the works of Piero della Francesca, he began mimicking the style until making it his own. Now, once you learn of him, that style can’t be missed.

“I was drawing a mandolin, and I made the sound hole very small, which made the mandolin look gigantic. I saw that making the details small made the form monumental. So in my figures, the eyes, the mouth are all small, and the exterior form is huge” -Fernando Botero for an unknown source.

While I had never heard of Botero before visiting Colombia, after a visit to the museum, like Will Smith’s character in “Men in Black” suddenly becoming aware of aliens living side by side with humans, his works began popping up everywhere.

Walking the same streets I had before, I now noticed his prints (especially his “Mona Lisa, Age Twelve”) all over the city, and then a sculpture in Plaza Santo Domingo in Cartagena.

From Singapore to Armenia to New York City, his sculptures are in cities all over the world.

Despite most of his works depicting life in rural Colombia, Botero spent the majority of his life away from his home country.

After winning $7,000 in a national art contest in Colombia he traveled to Europe where he lived in Italy, Madrid and Paris for three years. “In those days, Europe was very cheap, you could get a bed and three meals for one US dollar a day,” Botero told Post Magazine.

He then set off for New York where he lived for 13 years before returning to Paris where he’s spent most of his adult life.

He would make frequent trips back to his country, until the threat of violence and kidnapping limited his visits, The New York Times reports.

“One time, 15 years ago, they came for me, at 6am, to my house in the countryside near Bogota. I wasn’t there. They killed my two dogs, they tied up everyone. My dogs … after that incident, I never put my foot in that house again. Never again. Now it’s fantastic, it’s perfect – I spend a month in Colombia every year, but in a different house,” he said to Post Magazine in 2013.

“I’m the most Colombian of the Colombians, even though I’ve lived 47 years outside of Colombia,” he said. “I’ve lived 13 years in New York, and I never did a painting about New York. I’ve lived in France more than 30 years, and I’ve never painted Paris.” – Fernando Botero for The New York Times, 2004

He creates only from his imagination and has gained inspiration from personal and far away tragedies.

Never painting with models, saying it would make him “A slave to reality,” he is devoted to his imagination, and raised his kids with imaginative stories.

“I grew up believing that Tarzan lived in Central Park and that there were piranhas in the park ponds,” said Juan Carlos, Botero’s son, for the Los Angeles Times in 2000.

One of Botero’s other children, to his second wife, died tragically at four-years-old in a car crash while the family was vacationing in Spain. Fernando suffered a hand injury and lost part of a finger, but says he painted his best painting just after the crash, of his son atop a horse. “Pedrito On A Wooden Horse,” can be found at Museo de Antioquia, Medellin.

Throughout his career his paintings, drawings and sculptures have ranged from lighthearted to politically charged. He’s done series’ on the circus, the violence in Colombia in the 90s, bullfighting (his first aspiration was to become a matador), and the tortures of detainees by American personnel at Iraq’s Abu Ghraib prison.

There is much more to say, but I’ll leave it at that. Take in his changing themes, figure their inspiration from the year created, notice his lack of brush strokes, enjoy the comedy of his sculptures, try to find the meaning behind the paintings as my mom and I had so much fun doing.

Check back for more posts on Colombia – announced via Instagram @emiliefleuette 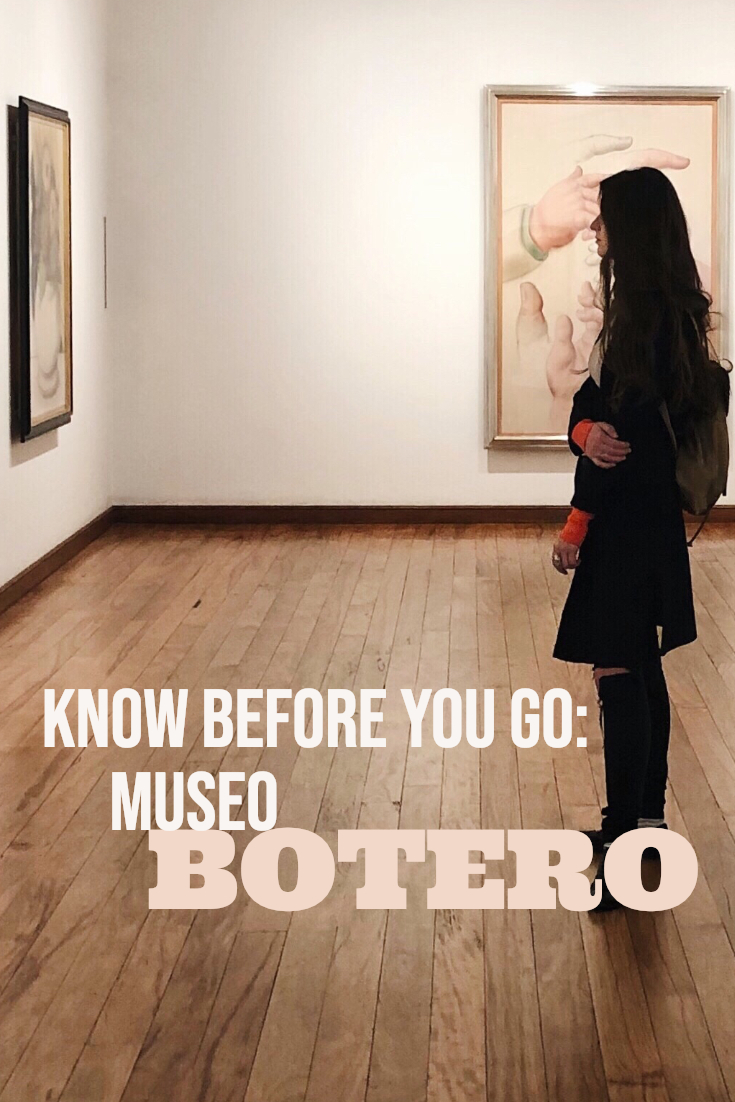 2 thoughts on “Know Before You Go: Botero Museum”