After a short drive from Skyewalker, the two Americans doing “Workaway” at the hostel take the lead and hop out of the car with me confusedly following, looking in every direction for what we came here for.

It’s my last day in Skye so it was now or never to see this waterfall they’ve promised is, “way better than the Fairy Pools.”

As I began to ask how long the walk will be given the unpromising flat barren scape in front of me, a huge crack in the valley of yellowing grass reveals a splash of green and Eas Mòr Waterfall appears.

As we walked back to the car I turned around to take in the view one more time, just as the fog began to clear and give way to a whole new scene. What was once the focus shrank in the presence of the newly unveiled dark jagged mountains of the Cuillin.

All that remains of a massive volcano of the past, Cuillin is a name you’ll hear a lot of if you’re visiting Skye. Called by some, “The UK’s most challenging mountain range,” the Black Cuillin, dark, sharp and shrouded in fog, holds the highest summits in Skye.

If climbing the peaks of the Cuillin is beyond your ability, as it is mine for now, Coire Lagan is the next best thing.

Surrounded by brooding tall black walls, the coirre sits about 600m (2,000ft) up from Glen Brittle Beach, and boasts awesome views of Loch Brittle and the sea.

I walked Coire Lagan before I learned about Eas Mòr so I didn’t know I could have easily added it into my route.

If you’d rather keep the walk shorter (and avoid midges in the grasses around the waterfall) just do what I did and head back down the way you came from Glen Brittle.

After enduring the long steady incline the vegetation begins to thin, then disappear; and just when you’re ready to let out an, “ugh,” it gets a little more interesting. 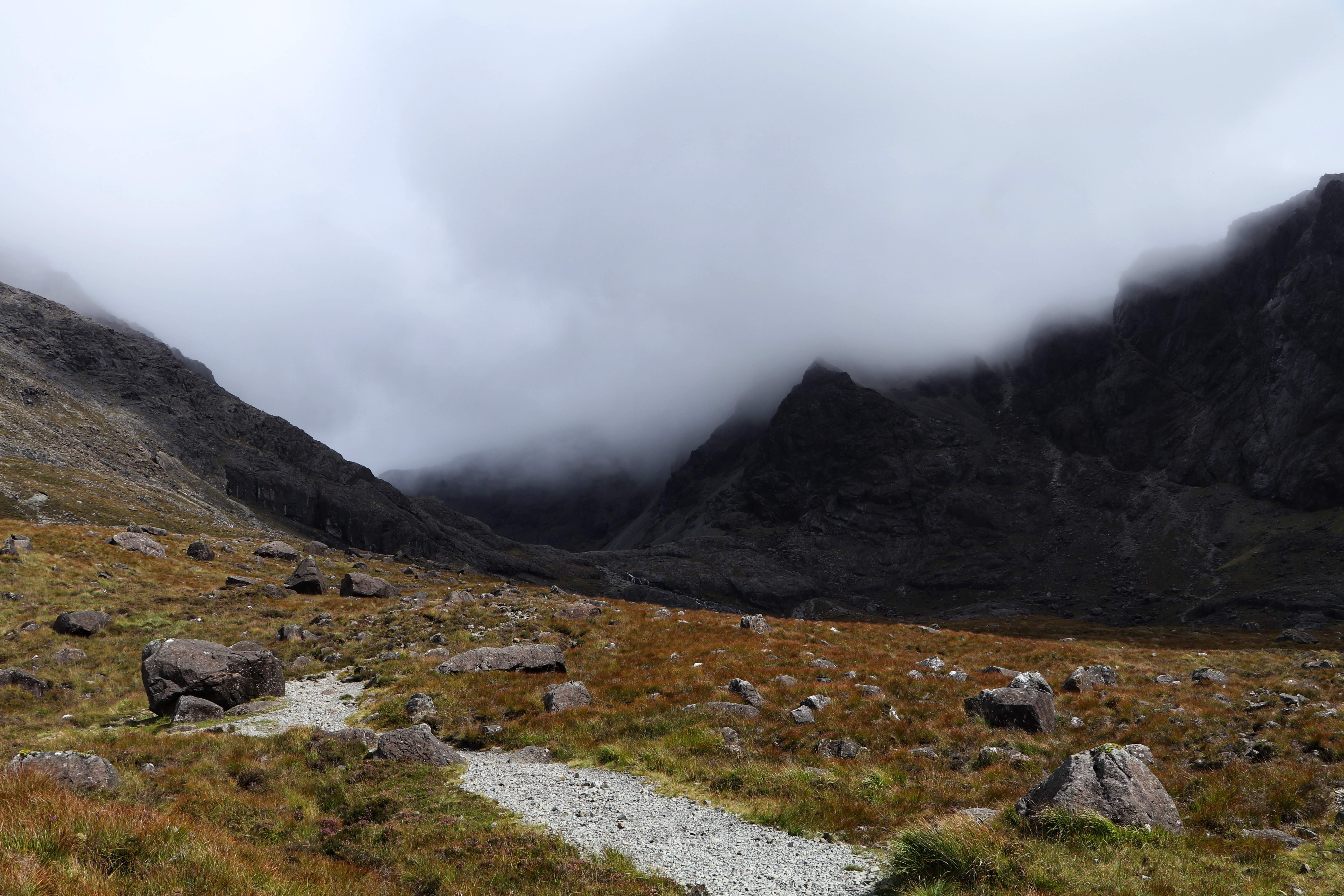 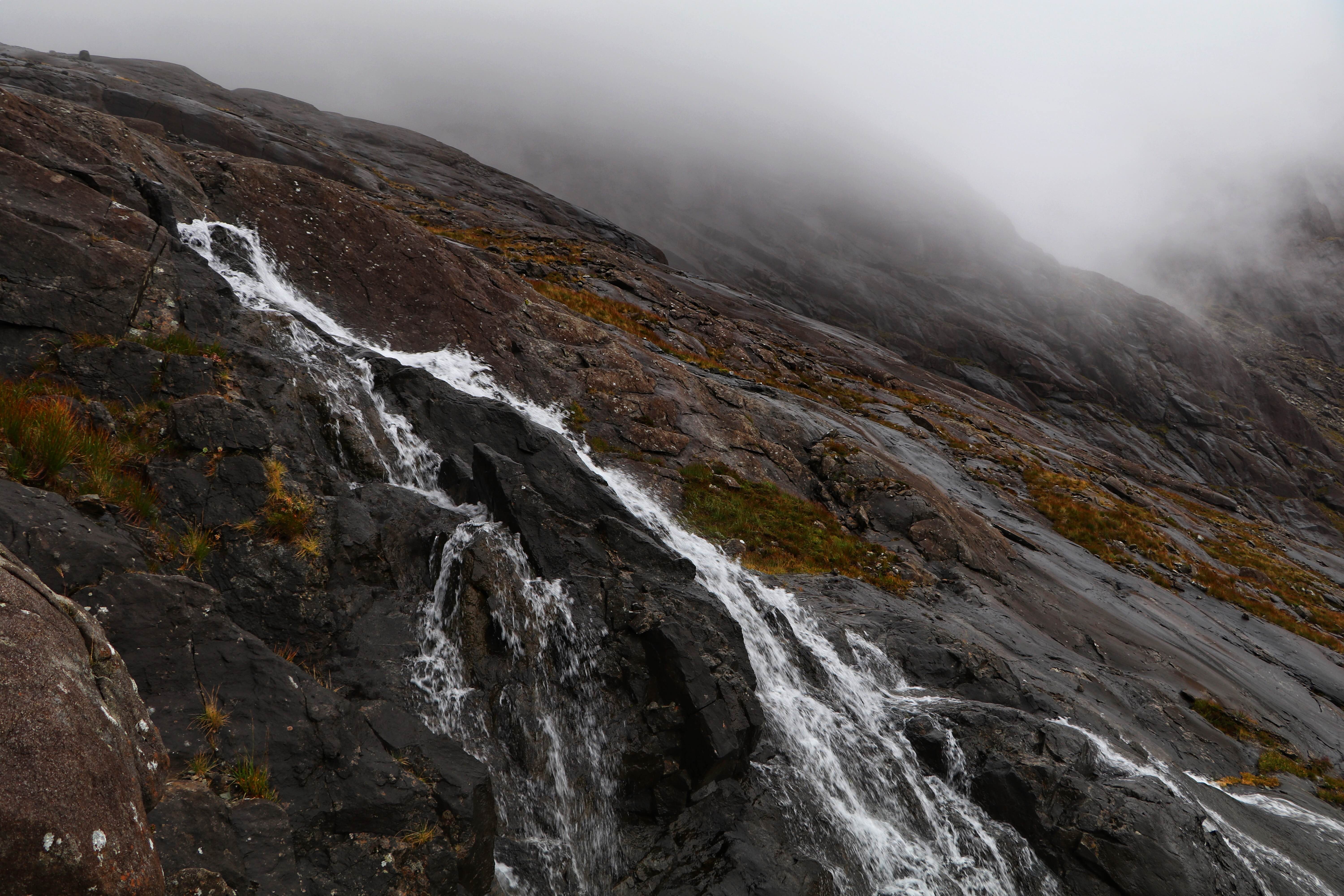 The fog meets the dark stones at the top creating major Mordor vibes. “The Lord of the Rings” association was the only thing keeping me going at this point, because I was kind of bummed that it looked like I wouldn’t be getting much of a view.

There’s a little bit of a scramble at the finish line, which I hadn’t expected and shook me up a bit since I was alone up there. You’ll have to use both hands and feet but once you get to it it’s not intimidating at all. As someone that had never really scrambled I thought it was the perfect introduction.

As with every walk I went on in Scotland, as I reached my destination and just when it mattered most, the fog cleared.

Once you make it to the corrie you’re greeted by a tiny loch and the sides of the Cuillin. 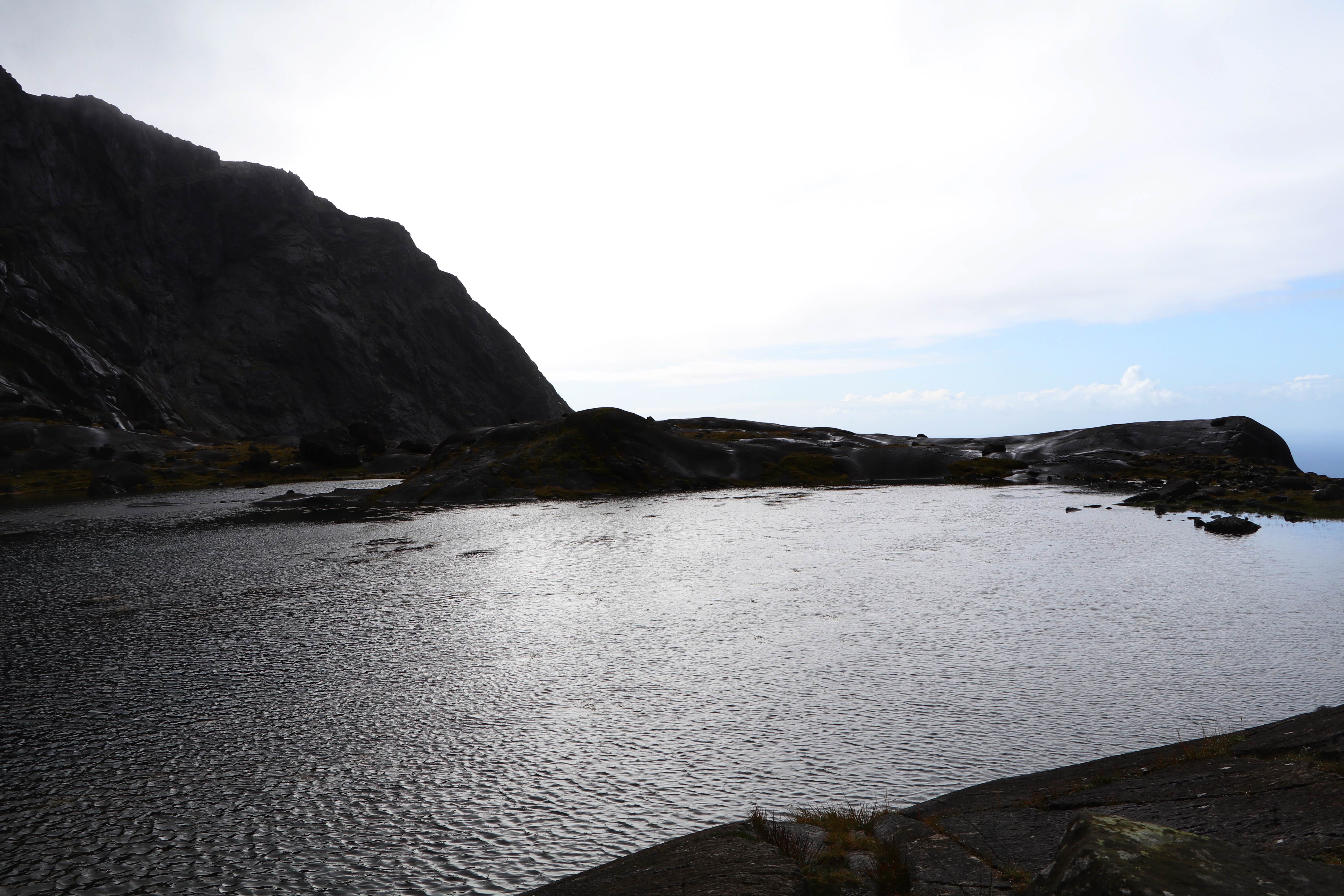 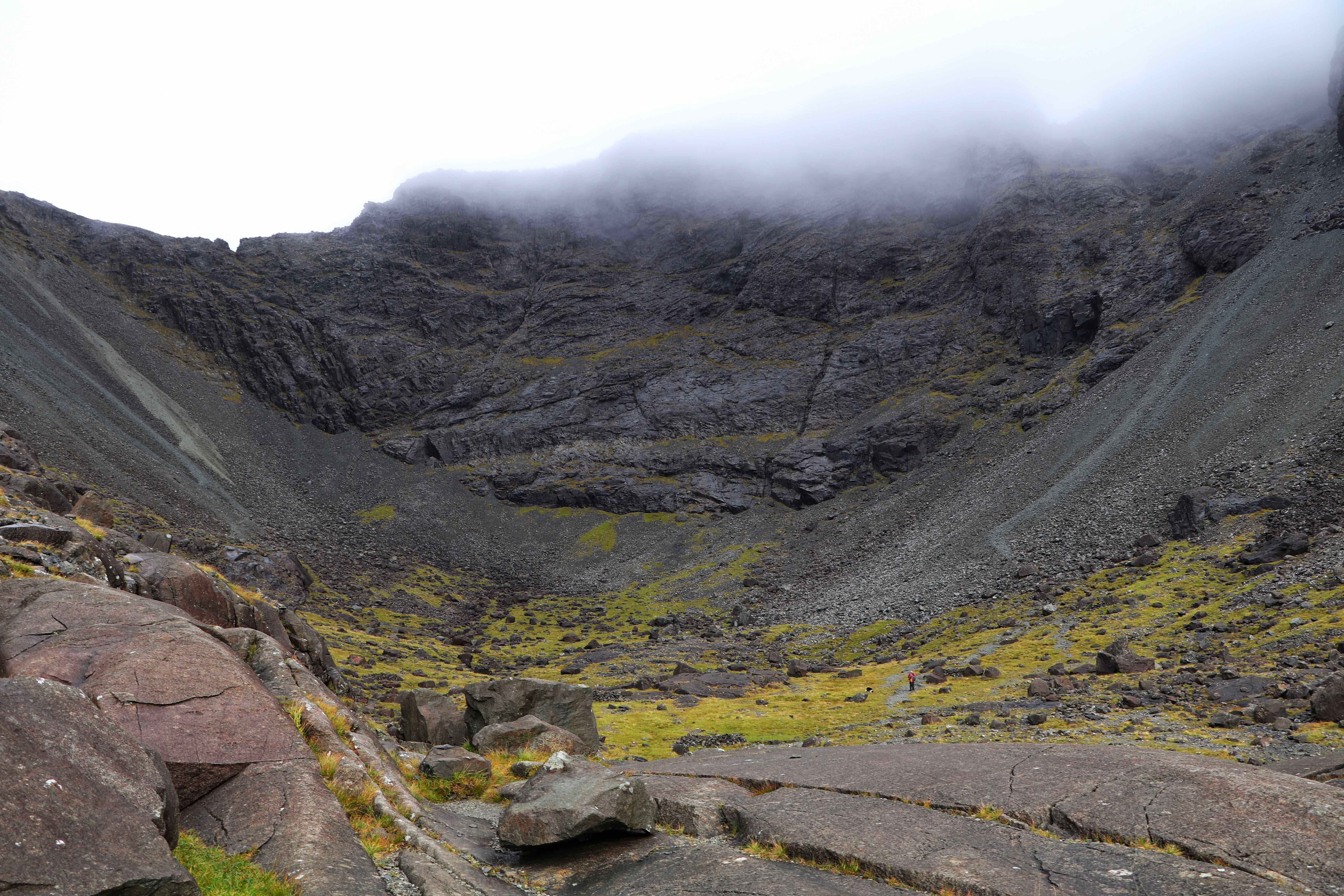 The wind and cold were bitter up there so I hid behind a boulder and ate a quick snack before heading back down.

The best part of the walk was looking up at the surrounding wall and seeing these little colorful dots, people making the daring climb up the steep Great Stone Chute to reach the peak of Sgurr Alasdair, Skye’s highest mountain. The scale is something you can’t understand until you see the tiny climbers inching their way up in person. They made the ridge triple in size.

The views on the way down weren’t so bad either. 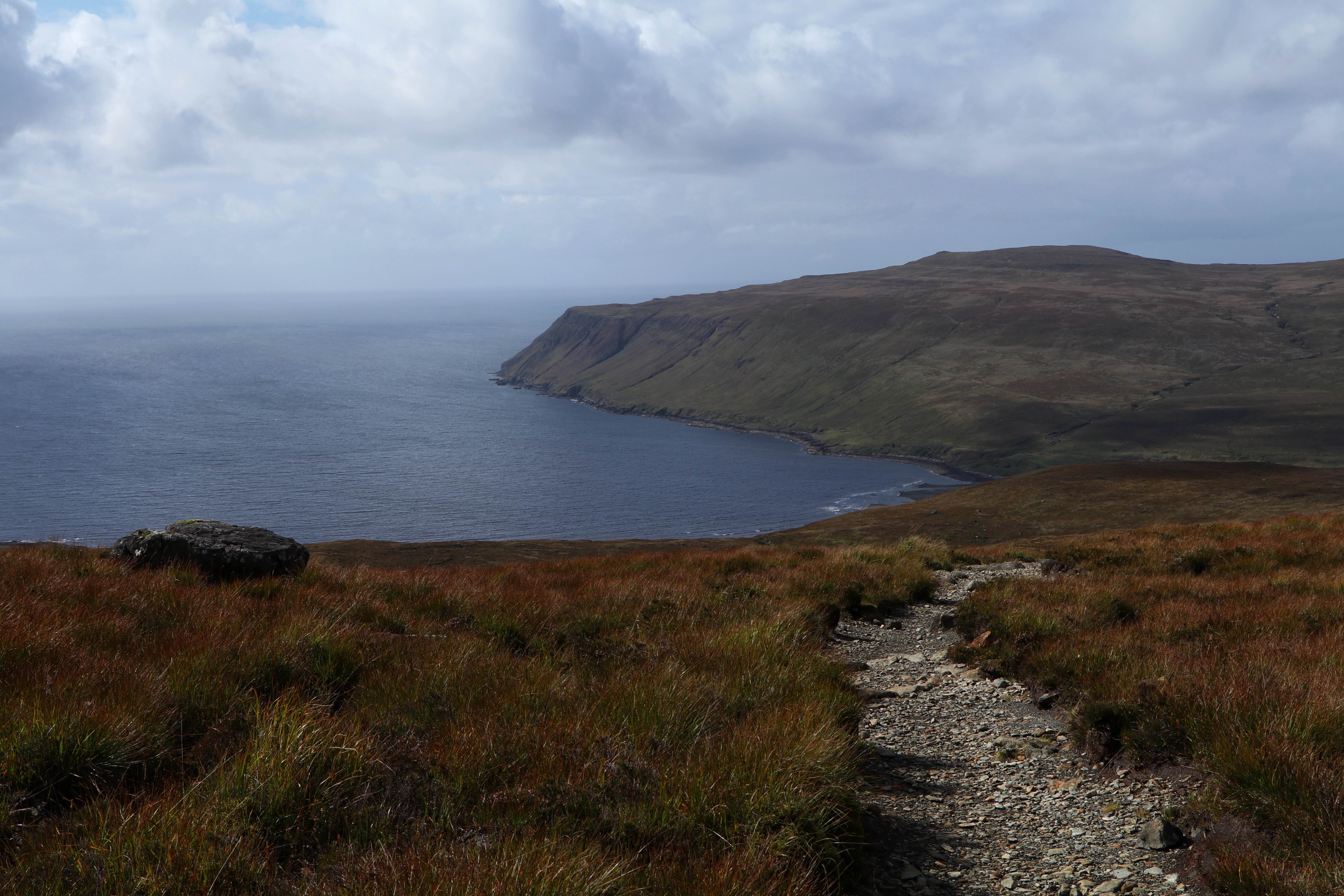 After enjoying the scenic walk back to my car I went into Portree for some lunch, then set off for the Quiraing, one of the most popular hikes on Isle of Skye. 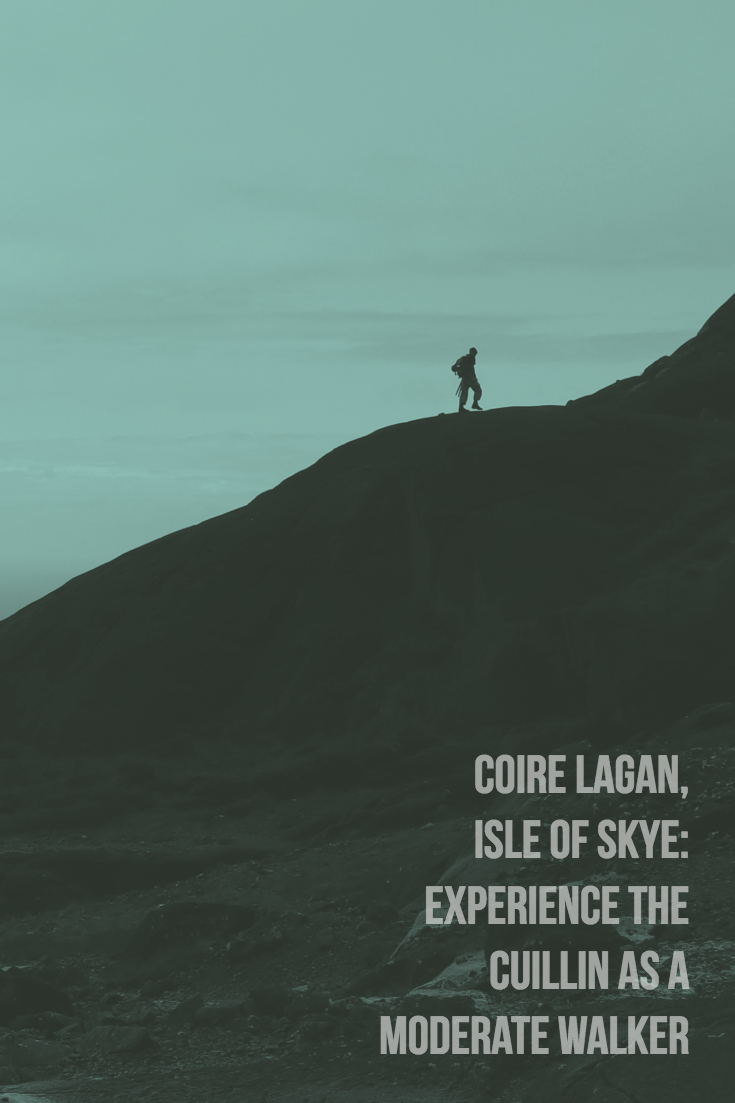